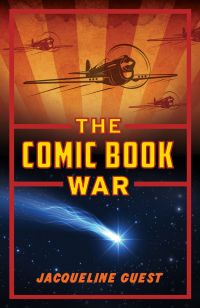 It's 1943 and World War II is raging. 15-year-old Robert Tourond is home in Calgary, but his three brothers are all fighting the Nazis. Robert follows the exploits of his favourite comic book heroes who also battle bad guys in the comics Robert spends his allowance on. When Robert finds a meteorite in Nose Hill Park near his home, in the same week that a meteorite features in his heroes' stories, Robert is convinced that a magical link exists between them, adn that the superheroes will protect his brothers. Robert has a nemesis of his own on the streets of Calgary - a girl they call "Crazy Charlie." When Robert gets a job delivering telegrams, Charlie does too, cutting into his profits. Then they discover exactly what those telegrams they're delivering have for the recipients. Then Charlie has to deliver one to Robert's house. Can Robert and his heroes really protect all three brothers and bring them home? What will happen if reality comes crashing into his world, like a meteorite falling from space? Who will help then?

Jacqueline Guest is the author of more than a dozen novels for young readers, many of them award winners. Jacqueline’s works are well-known for having main characters who come from different ethnic backgrounds including First Nations, Inuit or Metis. Alberta born and raised, Jacqueline Guest lives and writes in a cabin in the pine woods of the Rocky Mountain foothills. Robert’s brothers in The Comic Book War are based on her father and his two brothers.

Here are some search options to help you refine your query: